The Mongol Empire and its Influence 1218-1747:  from mass terror to urban administrators

For the history of the Central Asian steppe peoples prior to the rise of the Mongols in the 12th century, see René Grousset, The Empire of the Steppes (1970), and Barthold, Turkestan down to the Mongol invasion (1968) and Svat Soucek, A history of Inner Asia (2000). A short review chapter this period is Edmund Bowsworth (2010).  Among the better survey articles on the rise of the Mongol Empire to its successor dynasties and kingdoms, is Beatrice Manz’s essay in the The New Cambridge History of Islam (Vol. 3, 2010).  A discussion of the Timurid Dynasty and Empire as a successor to the Mongol Empire is found in Maria Subtelny (Subtleny 2010).

The origins of the Mongols are shrouded in the myth of its founding emperor Temüjin (1167-1227 C.E.), better known as Chinggis Khan (the new spelling) or Genghis Khan under the better known but older transliterated spelling of this name.  Temüjin’s extraordinary rise and success places him among the most fearsome but successful conquerors of world history. The lasting influence of the Mongol Empire’s form of organization and its Turkic and Mongolian ethnic influence is seen in the survival of the Chingissid Dynasty and culture that survived in Central Asia well intot he sixteenth and seventeenth centuries (McChesney 2010). 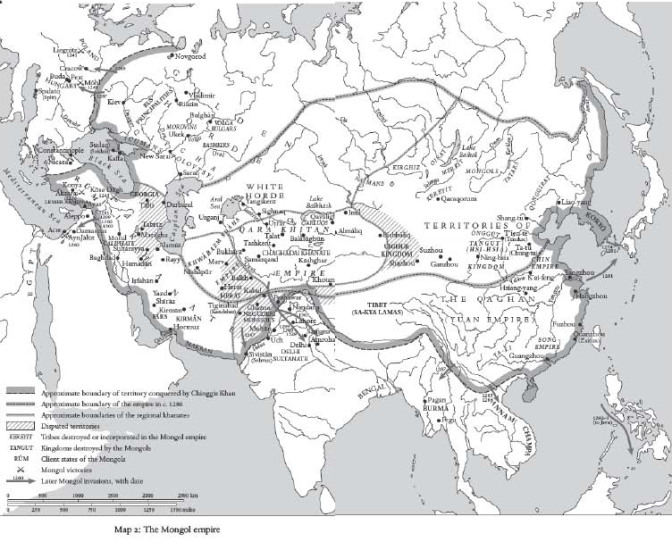 The Mongolians were successor nomadic rulers to several adjoining nomadic dynasties. To their West the Qara Khitay were a powerful rival tribe that ruled in the areas adjoining the Islamic territories of Western Central Asia near Samarkand. The Mongols also bordered the area of the Tü-Chüeh Turkic empire that dominated the eastern steppe in the 6th to 8th centuries[1]. This was succeeded by the Uighur kingdoms that bordered the Mongols to their South and West. Their home territory was in the eastern and northern half of the Central Asian grassy steppe lands, south and east of Lake Baikal (see Map 2).  Most of the Mongol tribes were nomadic pastoralists who raised their horses and other livestock on the grasslands, while some were living in forested areas where they hunted and fished; some Mongol communities also were farmers.  Like most nomadic societies it was a tribal society where kinship either real or imagined played important roles in maintaining or forming alliances to hold power and cooperation between groups and tribes. The Uighurs had developed their own script that influenced or was incorporated into a unique Mongolian writing system that was used in its early dynastic period.

The rise of Temüjin (Chinggis Khan) is legendary and partly myth.  The Secret History of the Mongols, whose text was preserved and translated from Chinese, provides the mythical legend of his family, that is comparable in purpose with the mythical origin of Romulus and the founding of Rome. Few details are known other than he had been forced out of his own tribal component, the Kiyran-Borjigin section of the Mongol peoples. Tatar forces had attacked and defeated his tribe in about 1147, a generation before he was born, and he was partly orphaned at the age of eight when his father was killed by Tatars. It seems his mother was then outcaste, and she was forced to raise her sons from outside her own tribe.  This appears to have had an enormous influence on Temüjin’s upbringing for he learned to make new allegiances with the Keraits, an outlying tribe and when he grew old enough he returned to claim his bride.  He gained the trust of the Keraits whose leader To’oril (Ong Khan) had been an ally of Temüjin’s father. Both men were forced to flee under pressure from the central Mongolian tribes and each fled in different directions.  Ong Khan sought and received support from the Qara Khitay in the West, while Temüjin apparently sought safety in exile in China.  According to the classic primary source and account of this history, The Secret History of the Mongols, Ong Khan managed to regain control of his tribe with Temüjin’s assistance in about 1196, (Ch. V, 85-89) who as a reward was adopted and made the heir to his chieftainship. In the Secret History we read of Chinggis Khan’s serious wounds in battle and close calls, all adding to his legendary leadership (Ch. IV, p. 74). But thereafter both fell out with each other and when Ong Khan was killed in raids by the rival Naiman, Temüjin consolidated his new power, organizing a powerful military bureaucracy and reward system for his soldiers with whom he shared some power and tasks.  Taking his new title, Chinggis Khan, Temüjin was ready to establish an empire of conquest and expansion, first to the West and then toward China[2].

By 1207-1218, Temüjin’s frontier armies had pursued out the Qara Khitay and pushed on toward the Islamic dynasties in Central Asia.  By 1219 his immense armies, using swift maneuvers, deadly archery and a systematic decimal system of regimental organization had defeated the Khwārazm Shah and cleared the way for an invasion of the Transoxiana cities of Bukhara and Samarkand. The Mongols invoked terror methods of sheer intimidation. They also carried with them skilled engineers who made siege engines and batteries that bashed in walls and towers. When cities like Bukhara and Samarkand resisted, they were laid siege, that collapsed after only a few days.  A systematic butchering of the entire military armies of these cities followed, while Bukhara, the city that had raised the great physician and philosopher Ibn Sina in the late 10th century, was burned to the ground and its civilian population removed either for slavery, forced labor or execution.  The strategy was to force neighboring cities to capitulate and surrender without any resistance, which some did.  After their surrender those cities were immediately placed under Mongol administration and a strict system of taxation[3].

By 1220 the Mongols had reached Khurāsān and as far as Transcaucasia in modern day Georgia. Meanwhile, another large force of the Mongols had pushed south into Persia and trapped and forced into exile the last effective ruler of Khwārazm Shah’s, his son Jalā al-Dīn who was forced to flee into exile by crossing a river in a desperate attempt to escape the Mongols.  Over the next year Chinggis Khan had to consolidate his holdings in the West as a series of rebellions broke out in Afghanistan and Persia. Parts of Persia would resist and rebel against Mongol rule into the 1230s when Jalāl al-Dīn was killed by Kurds in 1232.  Parts of Georgia and Armenia also offered some resistance. Thereafter, Chinggis Khan returned to the East and began his invasion of China until his death in 1227 (The Secret History, Ch. XII, 209).  Upon his death this empire was divided to be ruled by his four sons of his first wife;  these were Jochi and Chaghadi, Ogedei and Tolui, Ogedai was charged as the main military Khan and directed both the Western Campaigns into Transoxiana and invasions of Korea and China, while Jochi and his sons took control of portions of Russia.

To gain revenues the Mongolian state controlled monopolies of salt, wine, beer and other liquor, as well as on yeast.  They further extended taxes on households and on trade[4].  Not all was evenhanded in this expansive empire.  Ogedai, as with many other Mongol military men was an alcoholic, for there was a cult and addiction to massive amounts of imbibing in the various forms of alcohol that the empire gained, rice wine from China and Southeast Asia, beer from the West, and grape wine and other alcoholic beverages that were brewed and consumed.  When Ogedai died of alcoholism his wife administered some of the state as a regent and the Mongol command was not reconsolidated until Möngke Khan’s installment on the throne in 1251. While Möngke’s reign was marked by internal purges within the Mongolian elite clans, particularly against the purged supporters of Ogedai’s line, Möngke was a competent administrator who instituted a progressive tax in Iran, in which the wealthy might pay a rate seven times more than the poor. He also instituted the system of a census in his new Chinese territories[5].

Möngke also sent his two younger brothers to lead new invasions of expansion.  He sent Qubilai Khan, who is mentioned in Marco Polo’s journals, to rule in China, while he sent Hülegu to rule in the Western Central and South Asian territories. By 1258 Hülegu had sacked Baghdad and continued on to invade Syria where he sacked Aleppo.  Thereafter, other Syian cities, including Homs and Damascus surrendered without a fight to spare themselves from massacre. The physical limits of Hülegu’s conquest were tested at the famous battle of Ayn Jālūt in Palestine, where his frontier forces were defeated by a combined force of Egyptian and Syrian Mamluks  Thereafter the Mongols lost hegemony over Syria, which was still in the throes of Crusader wars and divisions.

In the West, as the Mongols retreated from Syria back toward Iraq and Persia they established the Ilkhanid dynasty, while the Mamluks gained power in Egypt and Seljuks in Syria and where some Christian Crusader city-states endured as at Acre.  The Ilkhanids absorbed Persian language and culture in its administration.  Two of the earliest histories of the Mongols were written by Persian administrators who worked for the Ilkhanid state. These were Rashīd al-Dīn Hamadāni, Jami’ al-tawārīkh, (Compendium of the Chronicles) (Morgan 2012) and the earlier chronicle by ‘Alā’ al-Din Juwaynī (Juwaynī, ‘Alā’ al-Dīn ‘Aṭa Malik 1912-37).  The subsequent integration of Ilkhanid state dynastic control with Persianate language and influence in Persia, Tajikistan and parts of Afghanistan continued, while the Timurid branch that succeeded it absorbed Turkic speaking and Turkic language influence under Timurlane’s rule and succession that made Samarkand its capital.

To the East, the reign of Qubilai Kahn intersected with that of the impressive Song Dynasty (960-1279() which the Mongols replaced with the Yuan Dynasty from 1271 onward.   Qubalai Khan integrated Confucian and Buddhist hierarchies and administration into his own dynastic rule and he gave his son both a Chinese Confucian and Buddhist based education as a process of enculturating the Mongols’ elite into Chinese.  The Yuan Dynasty ruled in China from 1271 to 1368, when after a series of failed naval invasions against Japan, natural disasters, famine and failed harvests it was finally toppled and replaced by the Ming Dynasty.

Grousset, René. 1970. The empire of the steppes: A history of Central Asia. Translated by Naomi Walford. New Brunswick, N.J.

Manz, Beatrice Forbes. 2010. The rule of the infidels: the Mongols and the Islamic World. Vol. 3, in The New Cambridge History of Islam: The Eastern Islamic World Eleventh to Eighteenth Centuries, edited by David O. Morgan and Anthony Reid, 128-168. New York: Cambridge University Press.

THE CHRONICLES OF HISTORY

READING INTO THE PAST ... WELCOME TO MY HISTORY & BOOK BLOG!