While most accounts of the Counter-Reformation, the Catholic project of opposing the Protestant Reformation center on Italy or the Spanish Hapbsurg Empire, I suggest this misses the concerted and immediate response of the Catholic nobility in Southern Germany, who undertook the first pronounced cultural reaction against the Reformation in its architectural projects in its main cathedral churches.  Of all the German Catholic Counter-Reformation building projects, the double domed addition to  Frauenkirche cathedral in Munich represents the most immediate and direct example of a reply to the Lutheran Reformation.  The two domed towers were constructed and completed in 1524, just three years after Luther had been excommunicated.  It was also constructed as a statement of the Catholic Princes and clergy just as raging Peasant Wars were to break out in other parts of Germany.  Bavaria remained one of the few regions where the power of the Catholic princes were able to suppress the Reformation sentiments of the local military order of the knights. The main structure of the Frauenkirche was begun in the 12th century with significant additions built in the middle of the 15th century.  The symbolism and raising of the two towers signified the Catholic presence amid the new Reformation.  Its two domes curiously styled after the shape of the Muslim Dome of the Rock in Jerusalem symbolized a return to the unified campaign of the Crusades of the late 12th and 13th centuries.

The interior of the Frauenkirche reveals the elaborate symbolism and hierarchy of standing and prestige of the Catholic nobility of Bavaria. With its side altars paid for by patronage of the nobility and aristocracy and its elaborate tomb structures for several emperors, it symbolizes the stance of German Catholic aristocracy and clergy against the Lutheran rebellion and its nobility in rival German cities. 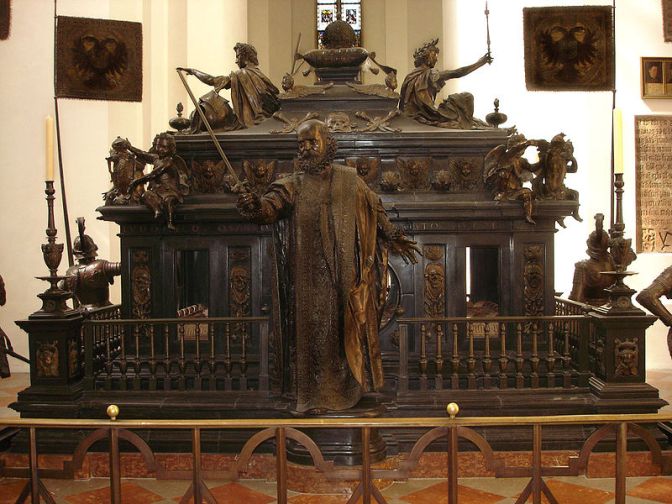 The elaborate reconstruction and rededication of the tomb of an emperor who had died more than two centuries prior reflected the needs of the Catholic aristocracy and its nobility to express their power and position in the Bavarian capital of a divided Germany.  The cenotaph and tomb borrows heavily from Italian Renaissance and Mannerist sculptural cenotaphs found in Rome.  It is marked by the full-standing sword bearing figure of the Emperor himself facing to the North in the direction of the Lutheran Reformation cities and territories.  Above and around the tomb are figures of Roman laurel wreath crowned emperors and goddesses who remind us of the title of Louis IV as the Holy Roman Emperor of a united Christendom. The symolism of the Roman dressed laurel crowned figures above the cenotaph’s structure, beckon the power of Rome, ancient and contemporary and the attempt to signify the continuity of both the Catholic Church and the Holy Roman Empire.  Beside the tomb are two knighted figures in full armor, a direct link to the role of the ritter or German knight in Bavarian and German court culture. It unequivocally restates the power of the aristocracy and princes over the formerly rebellious German knights who in the early 1520s had atttempted to create support and sentiment for the Reformation.  Their defeat is implicit in the symbolism of the raised sword of the Catholic emperor facing in the direction of the rebellious new Protestant north. The context of the so-called Munich Scandal in which Lutheran brought pressure against various orders of the Catholic clergy, including that of the Jesuit Order.  In 1571 a number of Lutherans accused the Jesuits in Munich of castrating boys who were being instructed for holy orders (Cloulas 1989, 324).  In the 1570s the reintroduction of the Tridentine Mass and special commissions for liturgical music to accompany it were being reinstated in Bavaraian Catholic churches and cathedrals, and the cult of Mary (Crook 1994, 63, 74).

Within the tomb structure and invisible to the modern tourist visitor is a surviving portrait relief of Louis IV that was carved in red marble and set on his gravestone.  This carved relief from around 1468 provides a view of the late pre-Reformation view of the emperor, for as it was also carved several hundred years after the death of its namesake, it portrays the ruler as a Catholic ruler whose dress and crown would not be easily distinguishable from an archbishop or the Pope himself. 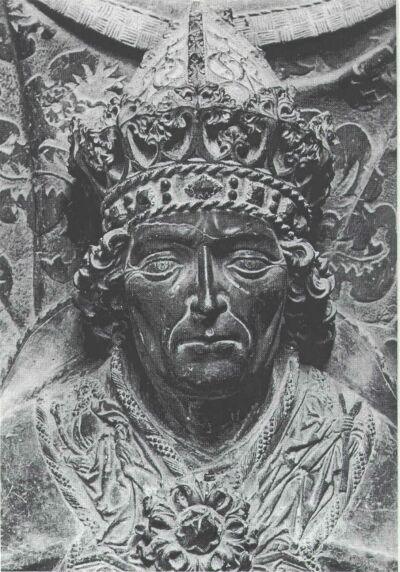 p through the end of the 15th century, the relation of the ruling aristocrat to the chief cleric was more or less symbiotic.  A review of illuminated manuscripts hand rendered until the arrival of the printing press revolution of the late 15th century show repetitive scenes of ruling monarchs consulting with their principal archbishops and abbots.

A page from the collections of the Nuremberg Chronicles of the late 15th century German physician shows the impact of writing in German with the continued need for illuminated handpainted scenes that reflected on the hierarchy of the high clergy and rulers at the top, the order of military knights in the middle and the lower aristocracy, and clergy and ladies of the court at the lower level.